This is an analysis of the effects of the TCJA on individual income tax liabilities of District of Columbia residents. We estimate that under the new legislation, and in the aggregate, income taxes paid to the federal government for 2018 will be lower but income taxes paid to the District of Columbia government will be higher with the onus of the increased local income tax burden being borne largely by the city’s low to middle-income tax payers. (See here for a more in-depth statistical analysis of the TCJA, and see here for an extended discussion of the results discussed in this blog.)

The TCJA will affect the income tax liability of different District residents in various ways, depending on a tax filers circumstances, such as income, marital status, number of children, etc.  Using the Office of Revenue Analysis Income Tax Microsimulation Model, we estimate that for tax year 2018 (for which taxes are due April 15, 2019) the TCJA will cause city residents to pay $617.3 million less in federal income taxes but $56.4 million more in city income taxes. Figure 1 shows an estimated 76 percent of city filers will see a decrease in their federal tax liability, and figure 2 shows that 43 percent of the same city filers will see an increase in their District income tax liability.

Distributional Effects of the TCJA 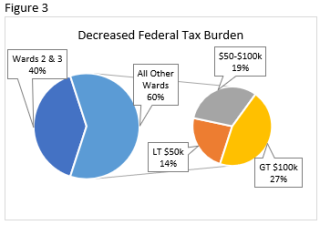 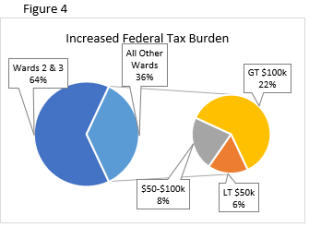 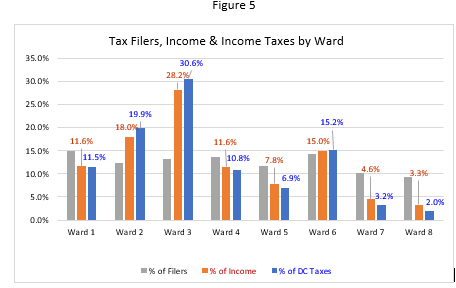 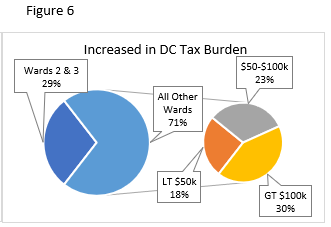 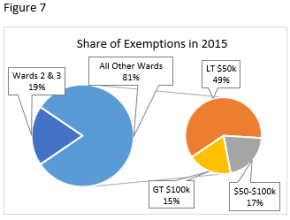 The main reason for differential impact of TCJA on federal versus the District income tax liability is the TCJA’s suspension of the personal exemption (for tax years 2018-2025). As figure 8 shows, Wards 2 and 3 only accounted for 19 percent of all personal exemptions in tax year 2015, while filers with income less than $50,000 who lived in wards outside Wards 2 and 3, accounted for nearly 50 percent of all District personal exemptions. On average, head of household tax filers (unmarried tax filers with dependents) claimed 3.62 exemptions on their tax returns in tax year 2015 (figure 9). Figure 10 shows that Wards 4, 7 and 8, have the highest share of dependents, accounting for 53 percent of the District’s dependents.  As such, tax filers in these wards will likely be most negatively impacted by the loss of the personal exemption with overall higher District income tax liability because of the TCJA changes, even with the almost doubling of the standard deduction. Our analysis suggests that the lack of a child tax credit like that in the federal tax structure is one of the major causes for expected higher District income tax burdens for lower income filers with dependents.

Combined Federal and DC Effects of the TCJA

At the federal level, it appears that a combination of the higher standard deduction and the higher child credit allows eligible low-income earners with dependents to lower their federal income liability despite the elimination of personal exemptions. The absence of such a credit at the District level appears to be a principle reason why many low-income earners with dependents will pay more income taxes to the District of Columbia government in 2018 under the new TCJA.