The incidence of death by injury—which includes accidental and intentional deaths—has been on the decline in the District. The rate of death by injury decreased by 12.7 percent between 1999 and 2014, despite a steady national increase in the rate over that time. The injuries counted include accidental deaths such as a falls or drug overdoses, as well as intentional deaths such as murder or suicide. The actual number of deaths by injury in 2014 (385) is about the same as in 1999 (382), but because the population in the District has steadily increased over that time, the rate has decreased. Only two other states – Alabama and Nevada – saw a decrease from 1999 to 2014, and the District had the largest percentage rate decrease of any state. While some year to year fluctuations occurred in all the states throughout the 15 years, most states have seen a steady rise in death by injury rates.

Until 2010, the District stood apart from Virginia and Maryland as the incidence of death by injury in the city was above the national level. Now the District is more like its neighboring states, all three of which are now below the national rate. 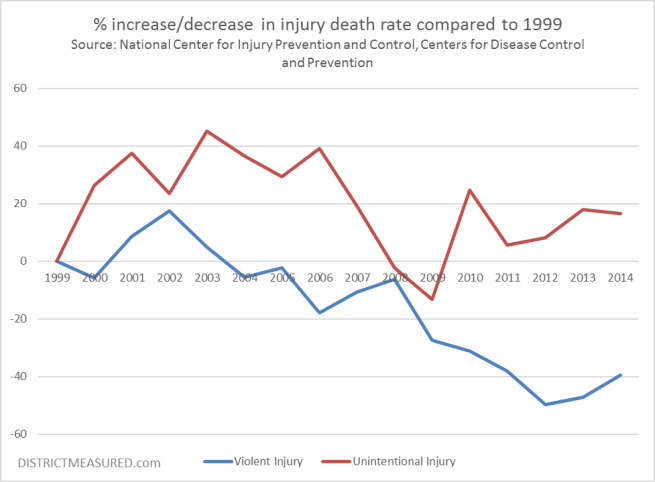 It may be argued that comparison to the national rate is not useful, given the District’s small population. So we also looked at how the District compared to the four least-populous states, two with fewer people than the District (Vermont and Wyoming) and two with more people (Alaska and North Dakota).  We found the incidence of death by injury has increased in all four of these states.  Alaska’s injury rate grew 11%, Wyoming grew 15%, North Dakota grew 25%, and Vermont grew a whopping 53% increase over 1999 rates. 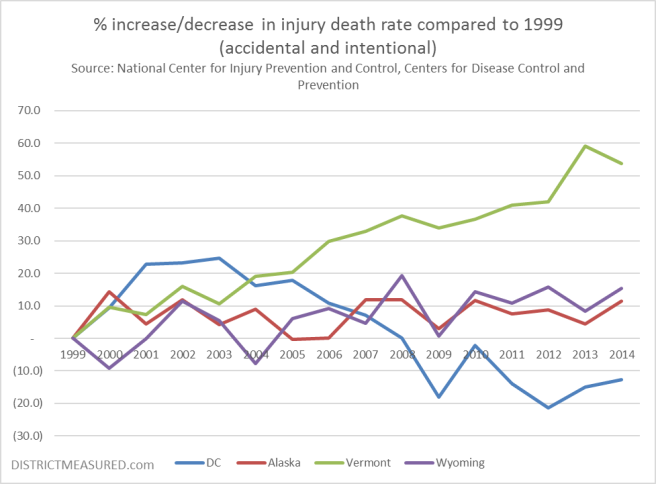 All of the least populous states saw increases in accidental injury death rates.

Injury death rates for females in the District have increased 62% since 1999, while rates for males have decreased 28%.  Boys and men are still more likely than girls and women to die of injury, which fits with earlier research (http://www.ncbi.nlm.nih.gov/pmc/articles/PMC3222499/), but the trend away from this stands out.

What is this data?

The data source is the Fatal Injury Data in the National Vital Statistics System (NVSS) operated by the National Center for Health Statistics under the Centers for Disease Control. (http://www.cdc.gov/injury/wisqars/fatal_injury_reports.html)

The June Trends report from the Office of Revenue Analysis reports that the annual growth in non-lawyer professional services and business services topped private sector job growth in the District in May. How does the District compare to the rest of the nation?

From May 2014 to May 2015, professional and business services jobs grew in 44 out of 52 jurisdictions (50 states, the District, and Puerto Rico); here is a look at how the District compares to the other states in this sector.

We also looked at the last ten years of District general and primary election history of Ward 4 and Ward 8.  (Please note we were unable to get 2004 Presidential Preference Primary data by ward in the time for this post.) The primary election figures show a steady number of registered voters for primary elections, with a slight upward trend. This is true city-wide, as well as in Wards 4 and 8. The actual number of votes cast varies widely, however.

The total number of registered voters for the general election has been steady, with a slight upward trend, until the 2014 election, which  shows a 4 percent drop in registrants District-wide. Ward 4 registrants dropped 7 percent between 2012 and 2014, and Ward 8 registrants dropped 11 percent from 2012 to 2014. The number of votes cast is consistently higher in presidential election years.

Each election is unique, data points are few, and there have been many changes in elections laws over the years. So, we draw no major conclusions at this time from the data.  However, a couple of interesting things stand out.  First, there was a large bump in registered voter for special elections between the year 2000 and 2011.  It’s possible this reflects the increased population since 2000, but there may be other reasons why the more recent special elections drew more people to register. Second, there does appear to be a slight drop-off in registered voters for primary and general elections between 2012 and 2014. Lastly, the data also follow the well-known, and often reported, trend that general elections draw the most voters, well above the numbers for primary or special elections.

What exactly is this data? Data are from the archive of election results reported by the District of Columbia Board of Elections.

March is Irish-American history month (see the President’s proclamation here), and with St. Patrick’s Day upon us, we looked to the American Community Survey to see how many people in the District are estimated to have Irish ancestry.

In 2013, the District was estimated to have 42,268, a figure which may include the most famous District resident with Irish ancestry, the President himself. The estimate has been fairly steady the last five years. 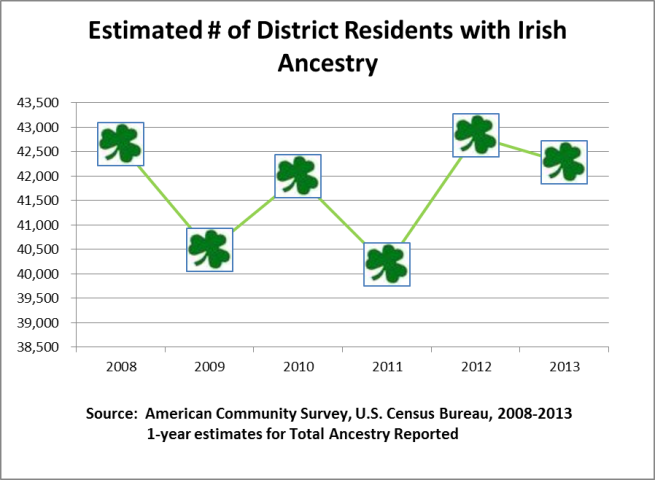 Among the states, however, the District has the third lowest percentage of the population estimated to have Irish ancestry in 2013 at 6.5 percent. Only Utah and Hawaii have fewer (percentage of) Irish.

What exactly is this data? We used the 1-year estimates of the U.S. Census Bureau, American Community Survey (ACS). Specifically, we looked at the variable “total ancestry reported”, which includes a tally of people with one or more ancestry categories reported. Although the ACS produces demographic estimates, it is the Census Bureau’s Population Estimates Program that produces and disseminates the official estimates of the population.

We are often asked about the structure of the labor market and earnings of those who work in the District. The best data source for this is BLS’s State Occupational Employment and Wage Estimates, which we recently used when the Council of the District of Columbia was discussing increasing the minimum wage.

Here is what we found out about the District workers:

Of the approximately 626,000 workers in the District in the May of 2013, close to 80 percent make $20 per hour or much more. These are people in the sectors typically thought of as professional and business services; they are, lawyers, economists, architects, engineers, computer scientist or specialists, or are in business, finance or management occupations.