DC’s private sector is now a larger share of the economy, and the City cannot count on increased federal spending to offset negative impacts

The U.S. economy is about to enter the longest period of economic expansion in its history as it passes the 10-year mark in June. Although a possible recession is not evident at this time, at some point a recession it is likely. When that happens, the negative impact on DC’s economy would depend on the nature and severity of the recession. However, as explained below, DC’s economy is not insulated from recessions, and exposure to the negative impacts from a recession is probably growing.

In a future recession, it would be reasonable to assume that the exposure of DC’s private sector would again at least be similar to that in the US as a whole (excluding manufacturing and mining sectors). However, one reason the private sector impact was lower in DC than for the similar sectors in the US in the last two recessions was the relatively large boost in federal spending that benefitted DC’s economy as the recession unfolded.

Federal spending. In the 2001 and 2007 recessions, federal spending increased, providing a counter-cyclical boost to the economy. Because the federal government accounts for such a relatively large portion of DC’s economy, this spending has provided a much more substantial boost to DC’s economy than was true nationally. (Federal jobs account for 25% of the jobs in DC compared to 2% nationally, and federal wages and salaries account for 31% of the total earned in DC compared to 3% nationally. Looked at another way, DC accounts for about 7% of all federal jobs and about 9% of all federal wages and salaries.

In a new recession it would appear that DC cannot count on receiving such a relatively large boost from federal spending. Under current federal fiscal policies, debt is increasing even as the economy expands. If controlling the level of federal debt is a policy concern at the time another recession occurs, counter-cyclical spending is likely to be much more moderate, if it happens at all, and the proportion spent in DC may be less.

The appendix charts show changes in private sector jobs, private sector wages and salaries, and resident employment for DC, the Washington area suburbs, and the US. 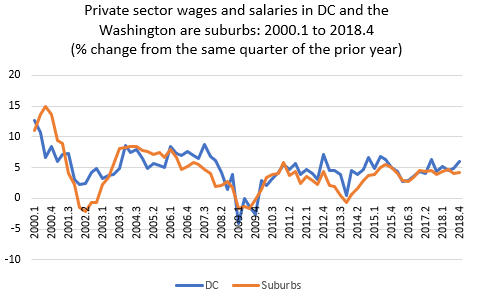 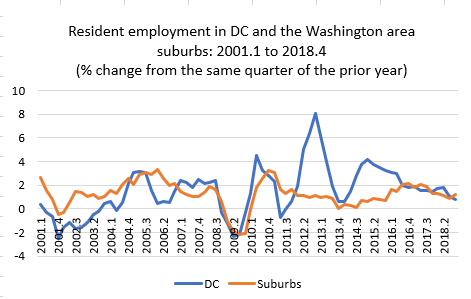 About the data: The wage and salary employment data for DC, the Washington area suburbs, and the US is from the US Bureau of Labor Statistics (BLS), as is the data on resident employment in all locations. Most of the data shown here are based on quarterly data calculated from data that is not seasonally adjusted. Washington suburban area data is calculated by subtracting the amounts for the District of Columbia from metropolitan area totals.

Data on earnings and wages and salaries in DC and the US are from the quarterly Personal Income accounts compiled for states and the US by the US Bureau of Economic Analysis.

Data comparing jobs and wages and salaries in DC, the Washington area suburbs, and the US were accessed through Moody’s Analytics. The data are all seasonally adjusted.

All of the data are subject to further revision next year.

US business cycle expansions and contractions are officially designated by the National Bureau of Economic Research (NBER). According to NBER, the 2001 recession was a brief one, extending only from March 2001 (the first quarter) to November 2001 (the fourth quarter). Particularly for DC, the occurrence of the 9/11 attacks in the midst of the recession makes it more complicated to discern only the recession’s impact on DC.

NBER defines the Great Recession of 2007 as running from December 2007 (the fourth quarter) to June 2009 (the second quarter).

An earlier version of this blog appeared in the April 2019 District of Columbia Economic and Revenue Trends issued by the DC Office of Revenue Analysis of the DC Office of the Chief Financial Officer. 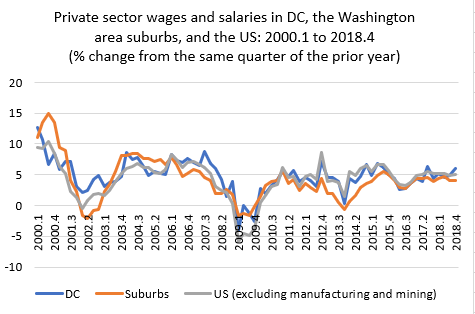 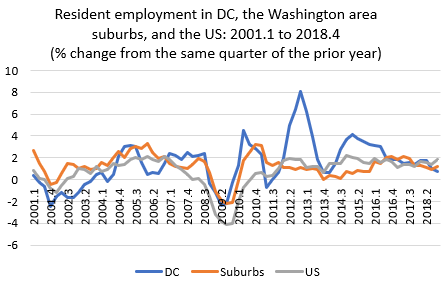