Those sectors’ contributions to wage growth in the District’s economy are, however, quite modest

According to US Bureau of Labor Statistics data, over the course of the last year job growth in DC came increasingly to be dominated by two sectors: education and food services. These two sectors were responsible for 11,800— about 90%—of the 13,133 net increase in all wage and salary employment in DC from September 2016 to September 2017. This high proportion of the job increase over the last year is remarkable because in September 2016 education and food services accounted for just 14% of all jobs in the city.

Rapid job growth in education and food services did not, however, translate into comparable income gains. The latest income data from the US Bureau of Economic Analysis (combined with seasonally adjusted employment data) indicates that the two sectors accounted for just 5.9% of the net gain in wage and salary income in DC from 2016.2 to 2017.2—despite job growth that exceeded the net increase for the economy as a whole.

Jobs and wages. The rapid increase in employment in education and food services over the past year appears to have made little impact on amounts earned by people working in DC. Whereas the two sectors accounted for 107.1% of the net increase in employment in DC from 2016.2 to 2017.2, their share of wage and salary growth was just 5.9%. This share of the increase over the year was less than the average share of wages attributable to those two sectors in 2016.2, which was 6.4%. 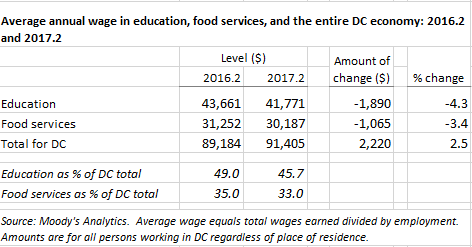 What accounts for the rapid growth in employment accompanied by modest impact on wages in the education and food services sectors? The data on wages and employment do not provide a full answer to this question. However, two reasons probably help to explain why such a development might occur.

The first reason might be part time employment. BLS employer surveys count people who are working on the survey date, whether such people are full time or part time. Even if hourly wages are increasing, average annual earnings could result if the proportion of people working part time was increasing. Both education and food services can be a source of part time work. It is worth noting in this regard that the only other sector of DC’s economy in which average annual earnings fell from 2016.2 to 2017.2 was transportation and warehousing, another sector in which there could be an increasing amount of part time employment.

The second reason could be changes in the composition of employment within the sectors. This appears to be a factor in education where the largest gains in employment have been in the “all other” part of the sector. “All other” could be such things as charter schools or preschools or after school programs where average annual earnings are likely to be less than in colleges, universities, or professional schools.

It should be noted, however, that the data presented here is preliminary and the picture could change if it is revised in the future. The next significant revision to the employment data will occur in March 2018, and BEA’s income data is revised as more information becomes available.

About the data. The employment data in this analysis is from the US Bureau of Labor Statistics which conducts monthly surveys of employers in DC and throughout the US. The calculations are based on 3-month moving averages of seasonally unadjusted data. The September 2017 data reflects revisions which were included in the October 2017 employment report. Wage and salary data are from the US Bureau of Economic Analysis Personal Income series for DC, accessed through Moody’s Analytics. The most recent BEA data is for the 2017.2 quarter. For consistency in comparing employment and wage data, seasonally adjusted employment data was accessed from Moody’s Analytics. As noted, all BLS and BEA data is subject to revision.

One thought on “Over the past year, education and food services have become the largest sources of new jobs in DC”