In the District of Columbia in 2015, a whopping $361.46 million was generated by the 10% sales tax rate, which is one of five rates used to tax the retail sale of various goods and services in the city. This rate, commonly known as the “Restaurant Tax”, encompasses the sale of not only restaurant meals, but also other prepared foods, alcohol/liquor sales for on-premise consumption, and the renting of vehicles. With so much revenue generated by this tax rate (over 35% of total DC sales tax revenue), we set out to examine the business and economic trends affecting the city’s 10% sales tax collections. To do so, we analyzed the annual sales tax receipts of all businesses in the city for all years from 2005 to 2015. We then focused on the top 100 taxpayers in the 10% tax rate during each year and categorized each taxpayer into one of nine sectors to conduct further analysis: Fine Dining, Casual Dining, Fast-Casual, Fast Food, Food Service/Catering, Supermarket, Hotel, Transportation, and Other, utilizing them to help draw general conclusions about the business outlook of the city as a whole. For example, we found that while there has been significant growth and development of the restaurant industry in the city, when we adjust for inflation between 2005 and 2015 for the top 100 taxpayers, many sectors actually see declining revenues in real terms. The full report can be found here.

First, we examined each of the top 100 taxpayers within the scope of their sectors in order to track the changes in each aggregate. Overall, we found that all but two of the sectors (excluding “Other”) increased their revenue from 2005 to 2015 (Table 1). Surprisingly, this growth was led by two of the more “unusual” sectors in the city’s “Restaurant Industry”: transportation and supermarkets. While comparatively small in 2005, these two sectors have grown tremendously, so that they outpace even Fast Food in sales tax revenue in 2015. While we aren’t too sure why car rental and car sharing services have done so well, especially since there are plenty of options to travel around DC, including taxis, the Metro, the Circulator bus, and many ridesharing options, this growth may suggest robust demand from 1) the city’s business sector; and 2) the city’s residents, who may rent vehicles for short trips and excursions out of the city given the trend for a growing number of new residents to choose to forego car ownership.

The two categories that experienced negative revenue changes from 2005 to 2015 (again excluding “Other”) were Fine Dining and Fast Food. This finding may be the result of the growing number of city restaurant patrons becoming more health conscious and/or more price sensitive. Therefore, they are largely turning away from fast food, which is considered less healthy, and fine dining, which can cost hundreds of dollars per meal. These customers are likely then turning to restaurants in the middle of the “dining spectrum”, fueling growth in fast-casual and casual restaurants, which offer relatively healthy and lower-priced dining options. 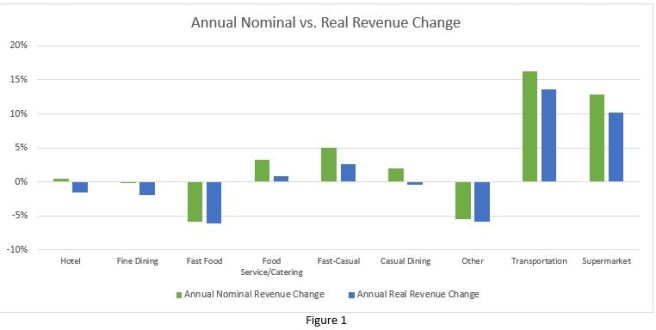 After adjusting all figures for inflation according to the District of Columbia Consumer Price Index, however, the figures tell a much grimmer story. Instead of the top 100 business mostly seeing increased business and consumer activity, most sectors are not able to keep pace with inflation, with only four sectors able to do so (Figure 1). Of these four, only two (transportation and supermarkets) were able to increase revenue at a rate more than 3% faster than inflation, showing the difficulty most companies face while trying to achieve growth.

As displayed in Figure 2, the top quintile accounted for over 80% of the market share in 2005, while the lowest quintile accounted for a meager 0.2%. Even though in 2015 the top quintile still accounted for the lion’s share of the overall market share (76%), revenue is slowly being redistributed towards the lower quintiles over time, with the share of all four lower quintiles increasing from 2005 to 2015, suggesting an increasingly diverse and competitive marketplace in the city. 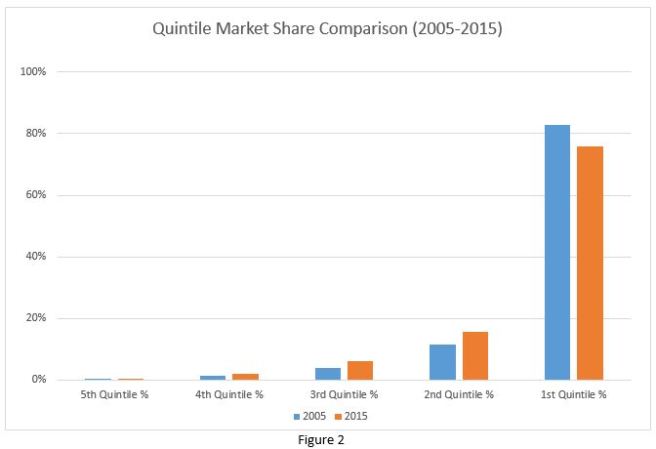 More clearly displayed in Figure 3, the vast majority of growth in sales tax receipts is visible in the middle three quintiles, which include taxpayers with liabilities that range from $4,500 to $150,000 in 10% sales tax in 2015. Each of these middle quintiles grew over 30% from their original market share, equating to $80 million in total tax payment growth. Additionally, we see an 18.5% growth in the number of businesses filing a 10% sales tax within the city from 2005 to 2015, signaling a positive environment for small/mid-sized business development and growth. 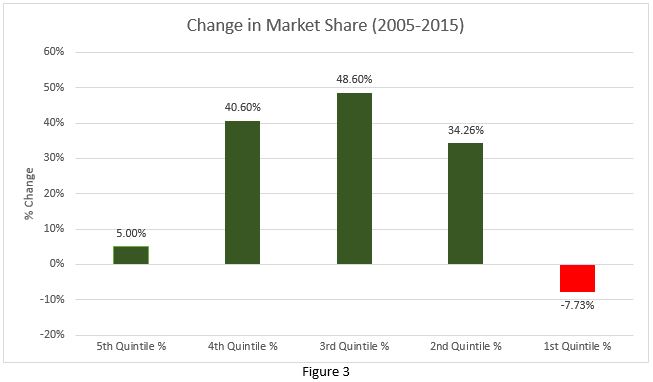 Every day, hundreds of thousands of people commute into the nation’s capital, and many more are in the city on business trips, for leisure, and for other reasons. Therefore, unlike most taxes, such as the individual income tax and property tax, the 10% sales tax is not drawn entirely from District of Columbia residents. Rather, it stems from the entire District’s population at any given time, which during working hours is approximately 79% larger than the number of DC residents, according to the US Census Bureau as of 2015. Thus, we wanted to estimate the proportion of the tax falling upon business consumers compared to DC households.

To do so, we grouped four of the aforementioned categorizations as “Business”: Fine Dining, Hotels, Food Service/Catering, and Transportation, while we grouped another four as “Household”: Casual Dining, Fast-Casual, Fast Food, and Supermarkets. We defined the Business industry as sectors where a majority of sales would likely stem from businesses and/or governmental organizations, while we defined the Household industry as sectors where the majority of sales would likely stem from individuals’ retail purchases.

We found that among the top 100 taxpayers, on average, sales tax revenue generated by the business sector represented 62% of total sales, while the household sector only generated 32% of total sales. Since such a large proportion of the tax burden falls upon the business sector, it is clear that rather than individual purchases accounting for the majority of 10% tax revenue, the revenue is largely generated from business purchases of catering, hotel, car, and fine dining services.

By way of our sector analysis of the top 100 taxpayers from 2005 to 2015, we first found that although all but two of the classifications (excluding “Other”) saw nominal revenue increases over the time period studied, this has largely been due to inflation: after an inflation adjustment, only four sectors saw real revenue increases, while only two saw increases significantly above the inflation benchmark.

Next, although we observed the top quintile of businesses in the city accounted for over 75% of the 10% tax revenue during all times between 2005-2015, we have noticed a gradual redistribution of restaurant retail activity towards the lower quintiles, with the vast majority of growth concentrating in the middle three quintiles. This, coupled with an 18.5% increase in businesses paying a 10% tax, suggests that small/mid-sized business growth is prominent in the District.

Finally, even though the city is experiencing steady population growth, gentrification, and other factors that should increase the tax payments of the household sector, the majority of the 10% tax burden still falls on the business sector, with their overall market share actually increasing during the time period studied. This is can actually be viewed as a positive, as many businesses from regions outside the District are contributing hundreds of millions of dollars every year towards D.C. tax revenue, instead of the tax burden entirely falling upon city households and residents.

5 thoughts on “Calamari, Cocktails, and Cars: A Glimpse into the District of Columbia’s 10% Sales Tax Collections”