The Federal Housing Finance Agency (FHFA) compiles a quarterly index of single-family house prices for the US, all states (including DC), and metropolitan areas. The index starts in 1991, and is based on how the same properties have changed in value since that time based on sales and refinancing obtained from mortgage and other data sources. (For more detail on the index see “about this data” at the end).

Price change patterns were fairly similar from 1991 to 2002, although DC and the metro area initially lagged the US in early 1990’s when DC’s economy was faltering.

Why have single-family house prices risen so much faster in DC than in the metropolitan area and the US? The explanation does not lie primarily in changes to general measures of income in the economy. Over the past 25 years DC’s rate of Personal Income growth has been the same as in the US and a bit less than in the metropolitan area. On a per household basis, DC’s income has increased a little faster, but the growth trajectory has still been fairly similar to that in the region and the national economy. 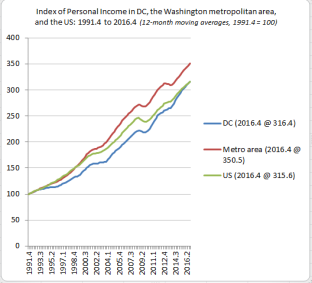 The major differences between DC and both the region and the US lie in the dynamics of the housing markets that go beyond general measures of income. Since 2002 DC’s housing price index has increased at a much faster pace than average household income. By contrast, recovery in house prices from the recession has not yet been sufficiently strong to catch up with rising average household income in the either the Washington metropolitan area or the US. 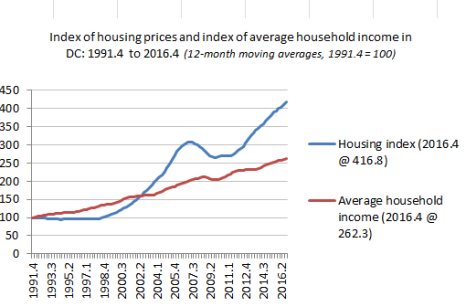 Housing market dynamics involve both supply and demand factors. Without trying to fully explain these, it should be noted that DC’s household growth since 2002 has been at a pace comparable to that in the Washington metropolitan area and faster than in the US as a whole. DC’s supply of single family housing, however, is relatively fixed. When growing demand from demographic change and rising incomes meets a relatively inelastic supply, prices can be expected to rise.