Peak blossoms for the cherry trees in Washington DC were expected earlier this year because of unusually warm weather for many days in February and early March. However, starting March 10, there were ten consecutive days of freezing weather with a wintry mix of precipitation on March 14, putting the official date of peak bloom in jeopardy. (The National Park Service defines peak blooms as the day when 70 percent of Yoshino cherry blossoms are open).

Because the Cherry Blossom Festival spans both March and April, we looked at data for those months individually and combined for fiscal years between 2005 and 2016. We compared past sales tax collections with the historical peak bloom dates. We also analyzed past sales tax collection data to see if the strength of March and April activity ties to an overall better sales tax performance for the fiscal year. 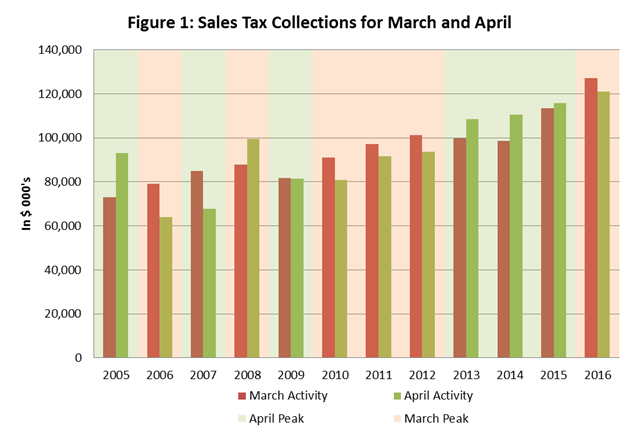 Our data on sales tax is from the Office of Revenue Analysis monthly cash collections reports. Information on Peak Bloom dates were obtained from the National Park Service also available at https://www.nps.gov/subjects/cherryblossom/bloom-watch.htm

Seble Tibebu and Bob Zuraski contributed to this post.