We define a job as low-wage if its median wage was in the bottom 25 percent of median wages across all jobs in D.C (or below $44,000). High-wage jobs have median wages in the top 25 percent (or above $86,000) and middle-wage jobs are in between.

You can see how this plays out by occupation in the graph below. Cashiers, janitors, childcare workers and others in low-wage jobs are more likely to live in the city than most other workers, though people in a handful of middle- and high-wage occupations, like managers of social and community services, teachers, and chief executives, have relatively high rates of living in the city too. Registered nurses and police officers (which include transit and federal police) are the least likely to live in the city.

Here’s where these workers live: 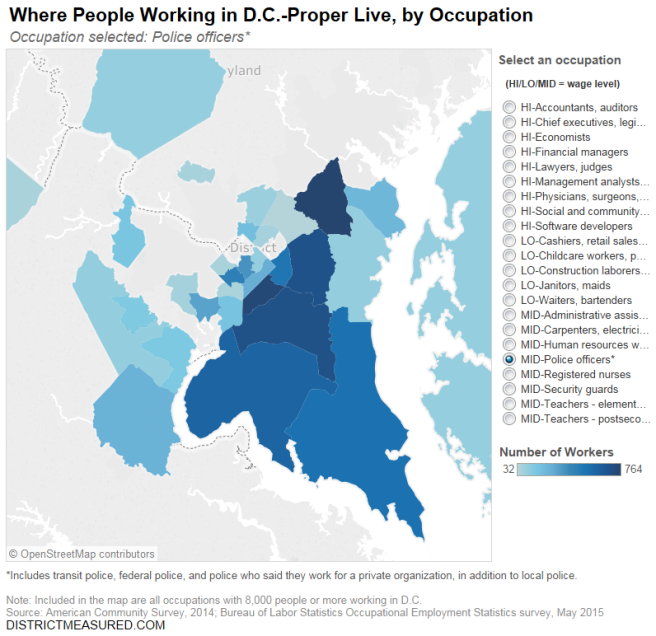 People in low-wage jobs tend to live in the city more than others, but that’s been changing over the past decade, as you can see in the chart below. The city is losing construction workers, cashiers, childcare workers, and janitors, and gaining people in high-wage jobs, like managers of social and community services, operations research and management analysts, and economists.

Percent of Workers Living in the City: Our data comes from the American Community Survey PUMS data for 2005-2009 and 2010-2104. For our universe of D.C. workers we started with everyone living in D.C., Maryland, or Virginia who works in D.C., so we are excluding long-distance commuters who work in D.C. but live in places outside of D.C., Maryland, and Virginia. When we analyzed specific occupations, we looked at all occupations with 8,000 or more workers in D.C., with the exception of miscellaneous managers since the category is vague. We grouped some occupations together so they surpassed our 8,000 person threshold.

Map of Where Workers Live: This data comes from the American Community Survey PUMS data for 2014. We only look at workers who work in D.C. and live in either D.C., Maryland, and Virginia. All of the occupation groups in the map have 8,000 or more people working in the city.

Errors: The data in this post have various margins of error since the data comes from surveys. In most cases we used a five-year data set to reduce the errors, and only looked at occupations with 8,000 people or more. The errors are highest for the map of where people live because for that we had to use a one-year dataset (geographic boundaries changed within the five-year dataset, making a map more difficult to produce). The map is intended to give readers a general sense of where people live; we discourage people from using it for direct area-to-area comparisons. Our findings on the loss and gain of workers of different occupations and wage levels are in many cases statistically significant and we have noted this in the post.

3 thoughts on “D.C.’s Cashiers and Janitors Are More Likely to Live in the City than Other Workers, but That’s Changing”