Over the past three years population and jobs in DC have grown steadily and at about the same rate. From the first quarter of 2013.1 to 2016.1. DC’s population grew a little over 34,000 or 5.3%. This percent increase is just a little bit faster than wage and salary employment. DC added almost 33,000 jobs over the period, a 4.4% percentage increase.

People need to live somewhere and they need to work somewhere, so it would be expected that both the number of apartments and the amount of office space would increase as well. The impact is much greater for apartments, however, than for office space. According to CoStar, from 2013.1 to 2016.1 the number of apartment units increased by 12,805 (7.8%), well over the percent gain in population. By contrast, the net increase of 1.22 million square feet of commercial office space represents an increase of only 0.8% over the three years, a percentage change far less than the gain in employment.

What accounts for these different relationships? The short answer is that most of the new population lives in apartments, but the connection between commercial office space and jobs is much looser.

Apartments tracked by CoStar represent about 55% of all housing units in DC. The other units are mostly in single family or other small structures whose numbers have not increased much over the past 3 years, although some have been reconfigured for more units. The housing supply for a growing population is thus mostly in larger multi-family buildings, principally apartments.

By contrast, many of the jobs added to the District’s economy do not need office space. For example, retail and food services accounted for more than one-third of all new jobs in DC over the past three years. In addition, other jobs are located in schools, hospitals, government office buildings and other locations that are not commercial offices. The relationship between job gains and commercial office space is further weakened by the well-documented decline in the number of square feet of space needed by many office workers, reflecting factors such as telecommuting, open office layouts, and reduced need for libraries in law firms.

With the recovery, apartment construction ramped up sharply starting in 2011, reaching 6.9% in the third quarter of 2015. Commercial office construction, however, was a very different story. It increased slowly, never getting close to the pre-recession pace. Furthermore, the majority of the office construction did not result in a net increase in office space. The primary effect of the new office construction seems to have been directed to meeting demand for improved amenities or better location. As shown in tables on the next page, over the past three years, more than 92% of the new apartments delivered to the market resulted in a net increase in inventory. For commercial office space, net inventory rose less than one-third of the newly delivered office space. 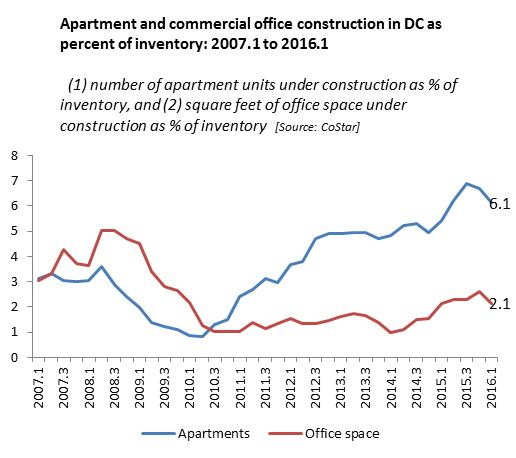