A recent court decision gave the District of Columbia control over its local budget for the first time since home rule in 1972. At a time when support for D.C. statehood is at an all-time high (67 percent of residents are in favor ), the court’s decision has brought a renewed optimism to the District’s 51st state movement. The Mayor and Council are taking advantage of the momentum generated by the court decision to propose a new ballot initiative and legislation to further the statehood agenda.

We all know the District’s statehood battle cry – Taxation Without Representation – but how much do we actually pay to the federal government each year? In order to answer this question, we dug into the federal tax collections data. What we found is that District residents and businesses paid a whopping $256 billion in federal taxes since the IRS began to track the District’s tax collections separately from Maryland in 2002. In 2014 the District paid the federal government $26.4 billion which is likely the largest contribution in the city’s history. The District only received $3.5 billion in federal grants, payments, and court contributions in fiscal year 2014 – a difference of roughly $22.9 billion (this excludes matching federal funds such as those we receive for Medicare, but all states receive these). Since 2002, the annual tax paid to the federal government grew by $11.7 billion (an increase of 80%). 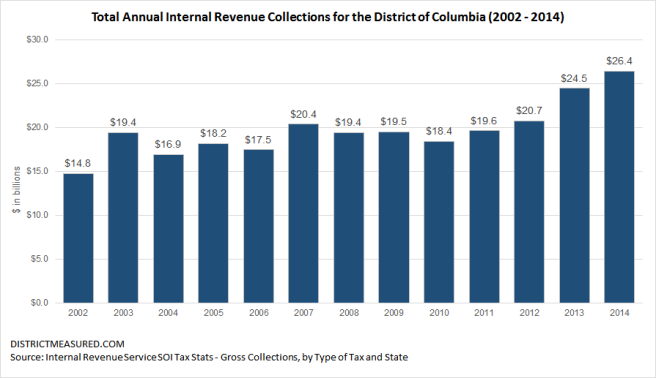 In 2014 the District paid more federal taxes than 22 states and paid nearly the same amount as South Dakota, Alaska, Montana, Wyoming, and Vermont combined. Those states have 15 seats in Congress while the District has only one non-voting delegate. 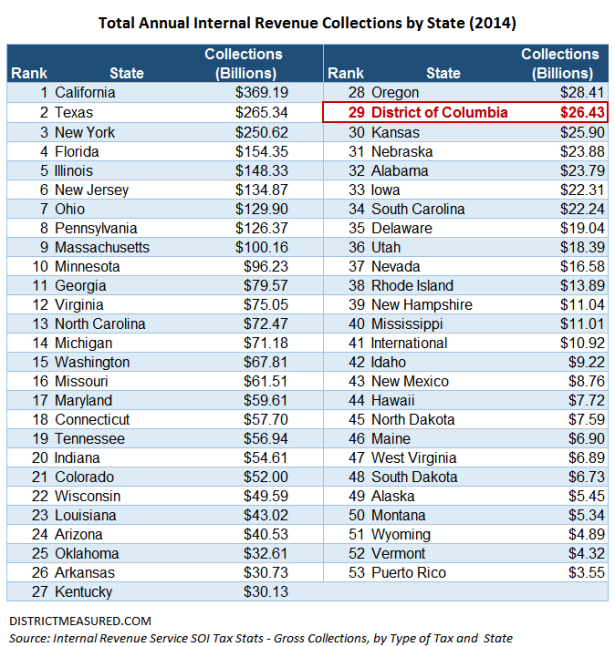 The IRS Data Book is published annually by the IRS and contains statistical tables and organizational information on a fiscal year basis. The data used in this analysis is published by the IRS annually and is available here. We used data from the Comprehensive Annual Financial Report for 2014 to obtain total revenue and federal government contributions to the District. In order to calculate federal spending on the District’s judicial system, we collected information from the District of Columbia Budget Request Act and the Budget of the United States Government for 2014.

According to the National Association of Unclaimed Property Administrators (NAUPA), states are collectively holding on to approximately $41.7 billion in unclaimed assets, including dormant bank accounts, stock splits, life insurance payouts, gift cards and uncashed payroll checks among other funds. This is up 27% from $32.8 billion in 2010.

Consistent with the nationwide trend, unclaimed monies in the District have shown a modest increase over the course of the last 10 years. As of the end of FY 2015, total unclaimed funds in the District amounted to $300 million corresponding to approximately 1.4 million account records. The proportion of claims paid out to rightful owners has also picked up since FY 2012. Below is a chart depicting this trend. 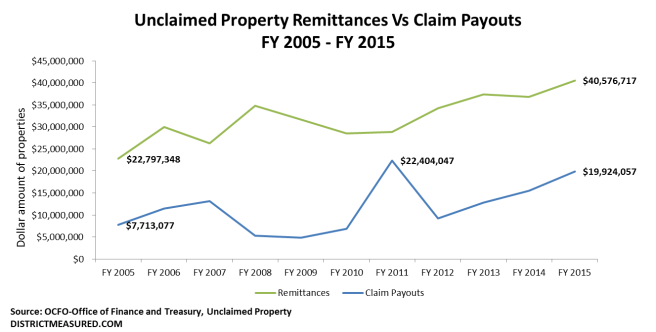 If you haven’t heard of unclaimed properties before, here is a simple description: if banks, insurance companies, credit unions, pensions and similar entities owe you money or other financial assets and you do not collect it, then it’s called unclaimed. These assets could be checking accounts, certificates of deposit, customer deposits and over-payments, gift certificates, paid-up life insurance policies, unpaid wages, insurance payments, money orders, refunds, saving accounts, proceeds of safety deposit box auctions, etc.

By law, all these entities have an obligation to remit the unclaimed property in their possession to the appropriate state(s). The idea is that the property is not theirs, and that states have more resources for finding the individual or company that has ownership. However, if no owner is found, states get to keep the property. In the District, all funds received by the Unclaimed Property Unit are deposited into the District’s General Fund. Although the money belongs to the owners, who may claim it at any time, the funds may be used in the interim to help defray the District’s operating costs.

Below are few statistical highlights that we thought would help increase public awareness of unclaimed properties in DC and nationwide.

In the District, uncashed checks and forgotten account balances seem to constitute the largest sum of unclaimed properties, whereas nationwide, orphaned 401(k) accounts (401 accounts forgotten by employees after they leave their job) are reported to bring in the most. 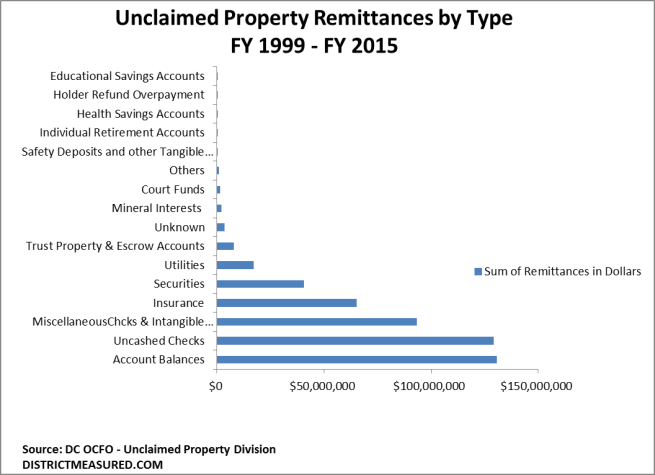 So, if you think you might be missing money, you may start your search with www.Unclaimed.org or http://www.missingmoney.com which would direct you to the appropriate state unclaimed property website. 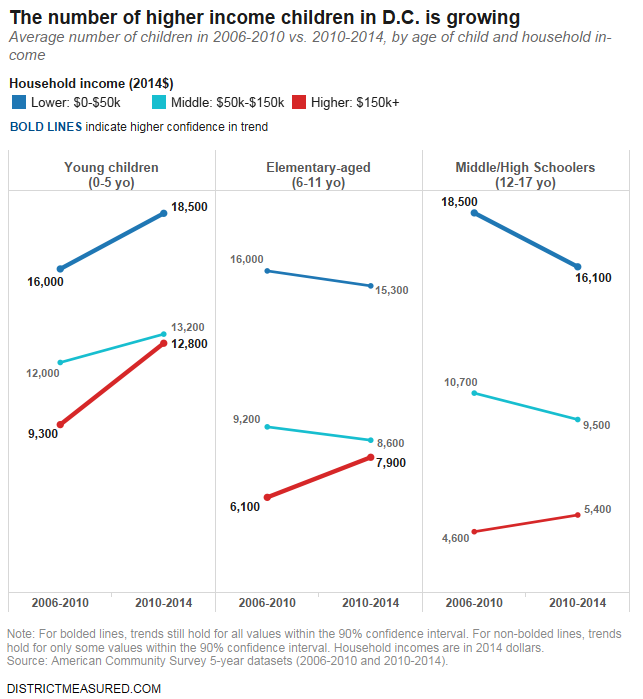 Recently we reported that the total number of children in D.C. has been increasing since 2010 after about fifteen years of decline. Since 2008 the increase has been driven by young children under 6, and in 2012 the number of school-aged children (aged 6 to 17 years) began to increase as well.

A different story emerges for school-aged children. For children between the ages of 6 and 11, there was a net increase only among higher-income kids. The number of lower-income and middle-income children in this age group declined slightly, but because the declines are small and the data has a sampling error, we are less confident in these trends. (We discuss the reliability of the data at the end of the post.)

Our data comes from the American Community Survey (ACS) 5-year data sets for 2006-2010 and 2010-2014 for the District of Columbia. We could not use ACS 1-year data sets because the small sample size makes them unreliable for this analysis.

Errors for each of the data points in our graph range from +/- 6% to +/- 11% for 90% confidence intervals. For the bolded lines in our graph, trends (population loss or decrease) still hold even if we assume the largest errors (at 90% CI) in the least favorable direction. For the non-bolded lines, trends reverse when we factor in the largest errors in the least favorable direction.

Household incomes are in 2014 dollars.

Every year in March the US Bureau of Labor Statistics (BLS) revises state employment data, in this case from March 2014, based on more complete information. This year’s result is a net reduction of 3,066 jobs in DC—0.4% of all jobs in the city—for the December quarter of 2015 compared to the previous estimate that had been made in January.

This reduction was the consequence of changes in the various sectors of the economy. Private sector jobs were decreased by 5,566 jobs (1.0%), for example, while public sector ones were marked up by 2,500 (1.1%).

Revisions to some individual sectors were of sufficient magnitude to change how important they were in the District of Columbia labor market in 2015. Higher estimates for local government, food service, and retail gave these sectors leading roles in DC’s job growth last year. Conversely, health and business services were found to have played much smaller roles.

In terms of employment, the revision makes DC a 30.9% government town rather than a 30.4% one.

The upward revision in public sector jobs is entirely attributable to local government—an increase of 2,767 (7.5%). (The federal government was trimmed by 267.) In the previous estimate local government jobs declined from 2014 to 2015; with the revision they go up by 1,433, equivalent to 16% of all job gains in DC for the year. The revision seems consistent with recent DC budget increases.

Food service was previously estimated to have added 367 jobs over the past year, 4% of all city job growth. The newly estimated yearly increase is 2,600—30% of all DC job growth, second only to professional and technical services. Similarly, the retail sector’s share of all one-year DC job growth has been raised to 19% from the previous estimate of 3%.

Although education got 1,400 more jobs in the revision, this was not enough to increase jobs in the sector over the prior year. The new level in 2015 is still estimated to be 1,900 (2.9%) less than a year earlier.

Four sectors drove the downward revision of private sector jobs—health, business services, non-profit organizations, and finance. Together they lost 12,301 jobs. Business services declined 7.9%, health, 6.3%.  In the previous estimate, these two sectors, with 16% of all DC jobs, added 7,200 jobs in the past year, accounting for 75% of then estimated one year job growth in the city. The new estimate shows one year growth of only 900 jobs for the two sectors, a modest 10% of all DC job growth. 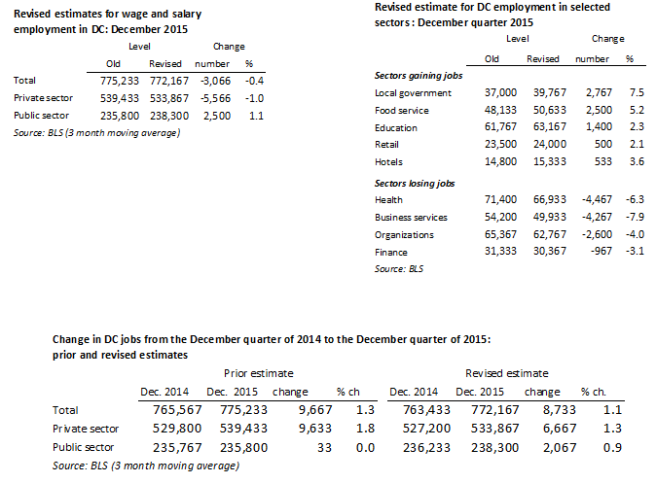 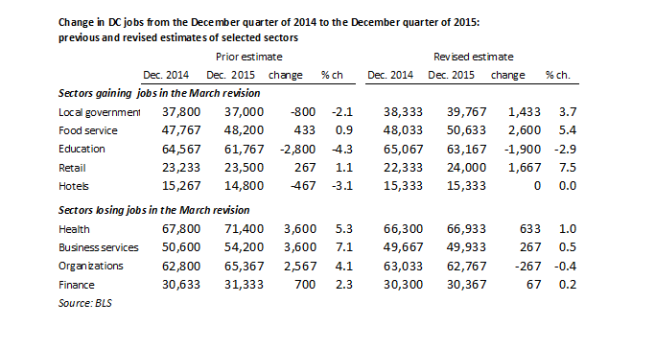 What exactly is this data? Each month the US Bureau of Labor Statistics compiles wage and salary data by industry for states and metropolitan areas.  In March of each year BLS revises the information for at least the previous year.  This blog compares the previous estimates through December 2015 that were issued in January 2016 with the revised ones issued in March 2016.  The December quarter is the average of October, November, and December.  The data are not seasonally adjusted.

A version of this blog appeared in the February 2016 District of Columbia Economic and Revenue Trends report. The Trend report also compares revisions for DC with those of the Washington Metropolitan area as a whole, and has a table showing revisions for all sectors of the economy.