After many years of decline, the total number of children in the District started to increase beginning 2011. 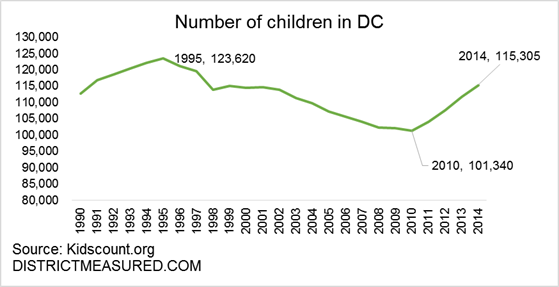 The turnaround in the overall population had happened earlier: the resident population bottomed out in 1998, remained flat for another eight years, and then it grew, and fast, especially since 2008, when we began adding over 10,000 net new residents each year. As we have shown here, most of the newcomers had been singles without children, who started replacing the families who had left the city. Only since 2011, the number of children began to grow, and in the last four years, the child population has grown at a faster rate than the adult population.

Separating children under the age of 6 and school-age children (ages 6-17) reveals differences in population trends.  The numbers for the younger children started recovering much earlier: the first positive numbers we see date back to 2005 and the growth has been steady since 2008 for this group. Among the older kids, however, the population slump began later than the younger kids (roughly 2001, compared to 1995 for children under 6), but it also recovered much later. So when we look at longer-term trends, we see that today we still have 3,500 fewer school-age children than we had in 1990, whereas we have 6,000 more children under the age of 6.

The familiar story we often hear—young people who moved into the city in early 2000s leave once their children hit school age—might be coming to an end.  Since 2011, we do not see—on net—the exodus of children from the city. But they now live in different neighborhoods.

To see the shift in where families live, we use the five-year summaries from the American Community Survey, which include data at the census tract level.  We use data from the 2010-14 summary, which combines five years of data and provides an average.  We then compare these to the 2006-10 data. Because the data are averages for five years, they don’t capture year-to-year variations.  For example, the five-year data summary does not show the recent growth in the number of school-age children, as it includes two years of decline (2010 and 2011), which overpower the three years of growth (2012, 2013 and 2014).  (But five-year-summaries are our only choice for this analysis. Because census tracts are small, the annual data are very unreliable; ACS does not even publish them.  Adding five years of data together makes things a bit more certain, but the error terms could still be large.)

Here is the interactive map.

How has this map changed since 2006? Below we show the change in the number of kids in each neighborhood in the last five years compared to the 2006-2010 period. You can see that that neighborhoods around the 16th Street and Georgia Avenue corridors north of Columbia Heights have attracted many families with children. The Takoma, Manor Park, and Brightwood Park cluster have added over 1,000 children, second only to the extremely popular Brightwood Park, Crestwood, Petworth neighborhood cluster, which added over 2,000 children. Capitol Hill now has fewer children (but only a modest decline of 100).   There are 1,280 fewer children east of the river now, but when broken down by neighborhood clusters, we see that five out of the 11 neighborhood clusters added more children (the biggest gains were in the Garfield Heights, Fort Stanton and Knox Hill cluster, which has seen lower vacancy rates and increasing home ownership).  Eastland Gardens and Kenilworth, on the other hand, lost half the children who lived there between 2010 and 2014 (a continuing trend for these neighborhoods), and the River Terrace, Benning, Greenway, Dupont Park cluster, which has been losing housing units and seeing increasing vacancy rates, also lost one third of the kids in the neighborhood.

Here is the interactive version of this map.

Families with young children make very different choices about where they live compared to families with school-age children.  They are more likely to move to the city, or stay in the city after having a baby, and could settle in any one of the neighborhoods. The map on the left below shows that one finds more children under the age of 6 in almost every neighborhood, but especially in the area that borders Rock Creek Park: neighborhoods along the 16th Street and Georgia Avenue corridors,  from Colombia Heights to Takoma Park, added  2,758 children under the age of 6. This is over a third of the net increase for this cohort. The notable exceptions to the growth are the neighborhoods that lie on the north west of the park  and a few neighborhoods east of the river, especially the River Terrace, Benning, Greenway and Dupont Park cluster. It is possible that young families are being priced out west of the park. Or perhaps, young parents are staying in the neighborhoods they lived in before they had kids.

Here is the interactive map.

Families with school-age children are pickier about where they settle. Neighborhoods north and west of downtown are adding more school-age children, neighborhoods that lie to the south and east of downtown continue bleeding.  There are more school-age children west of the river, but this is possibly aging-in-place as children who are included in the 0-5 group in the 2006-2010 data summary migrated to the school-age group in the 2010-2014 summary. Neighborhoods west of the park added 1,688 school-aged children. In comparison, the Brighwood Park, Crestwood, and Pethworth cluster, just by itself, added another 1,298. Columbia Heights, another strong destination for families with young children, cannot appear to hold on to the families with older children.  The cluster that holds Columbia Heights and Mt. Pleasant lost 574 children between the ages of 6 and 17. This is also true for the Brookland, Brantwood, and Langton cluster.

The biggest declines are in the neighborhoods east of the river, which collectively lost 2,654 school-age children. Losses were greatest in the neighborhoods along the northern border with Maryland.  The neighborhoods in these clusters, similar to the south east neighborhoods, used to have very high concentration of children but have been losing them since 1980s. For example 35 percent of the Eastland Gardens and Kenilworth’s population are children, down from 39 percent in 2000. In the Deanwood, Burrville, Grant Park, Lincoln Heights, and Fairmont Heights cluster, the number of children in 2010 was half of what it was in 1980. This neighborhood is now adding younger children, but not yet, school-age children. And given housing prices in the city and household incomes east of the river, most families who left these neighborhoods have likely moved out, and did not relocate in another neighborhood in DC.

The population dynamics across neighborhoods provide yet another picture of gentrification and where we are most likely to find it.  The city’s most expensive neighborhoods (when it comes to housing) are holding on to the school-age children but are not able to add young families. While east of the river continues to have the highest concentration of children, if trends continue, neighborhoods near the 16th Street and Georgia Avenue corridors could claim this distinction soon. Neighborhoods east of the river are adding younger children, but rapidly losing school-age children, and on the net losing families.

There are 39 neighborhood clusters in the District, and unlike wards or census tracts, they are not drawn to be of similar size. Some are very small, others are large and densely populated. For example, the Brightwood Park, Crestwood, Petworth neighborhood cluster has the greatest number of children (8452), but it also has many adults, so the share of children in its population is only 20 percent.

We compile the neighborhood data from the five-year ACS data summaries, which include census-tract level data, using the tract-to-neighborhood cluster mapping from neighborhoodinfodc.org.

Data on child population is from kidscount.org.

18 thoughts on “Kids in the neighborhood: The District has more children, but they are not where they used to be”