Last year, 48 percent of students attending D.C. Public Schools were at-risk, meaning they were homeless, in foster care, qualified for food stamps or TANF, or were high school students who’d been held back a grade. The share of at-risk students in a DCPS school varies greatly, from 1 percent to 90 percent.

DCPS students are assigned to a neighborhood school but school mobility is high.  In 2012, 43 percent of DCPS students attended their assigned neighborhood school.  For charters, though, there are no attendance areas.  So we wondered: can charter schools, which base admissions entirely on a lottery instead of a student’s address, better mix at-risk students than DCPS and create more egalitarian schools? Our answer is a qualified no. 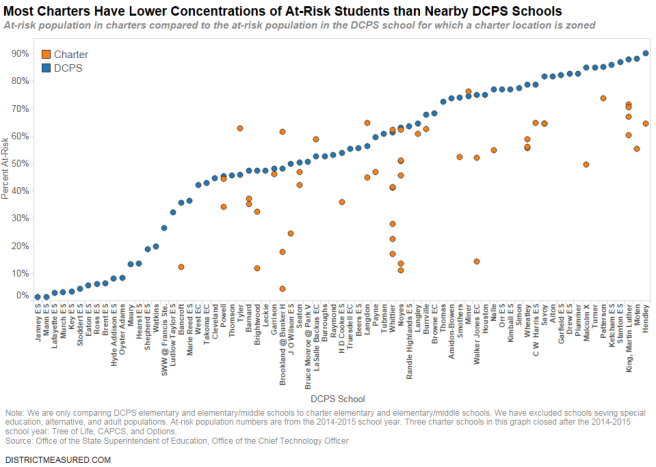 We found similar results when we plotted the percent of at-risk students in a school versus neighborhood home prices. In neighborhoods with the lowest home prices, charters have considerably smaller portions of at-risk students than DCPS schools. As home prices increase, there are charters that have at-risk populations more similar to those of DCPS schools, though other charters in these areas have very small at-risk populations. There are few charters in the areas with the highest home prices. 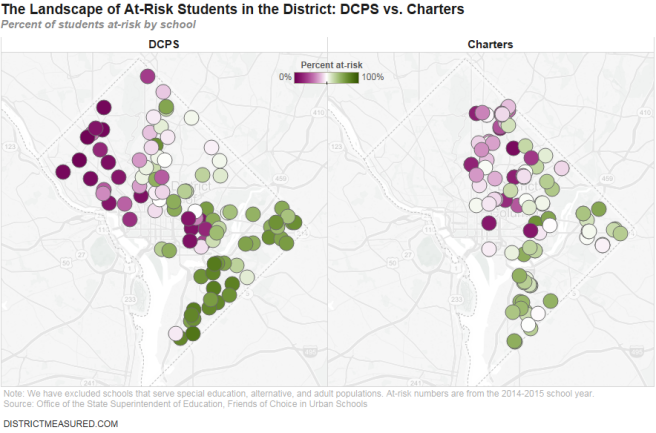 Put another way, both DCPS and charters have some of the least economically diverse schools in the city—they’re just located in different parts of the city. 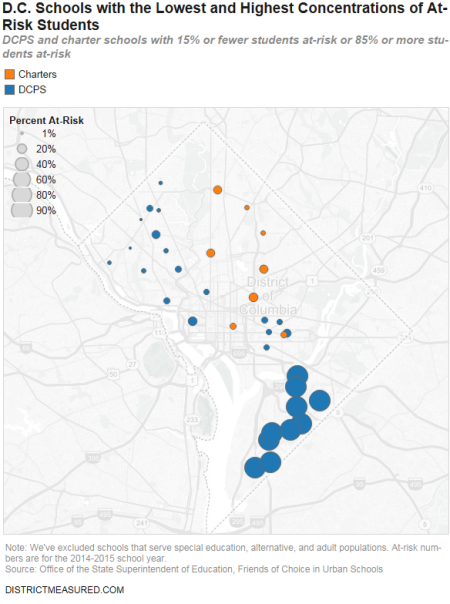 The map below gives you another way to see what’s going on in different parts of the city by comparing charters and DCPS side-by-side. The map is interactive and it lets you zoom in on different neighborhoods and filter schools by the size of their at-risk populations.

One thing that strikes us in the map is the marked difference in at-risk populations in charters and DCPS schools east of the Anacostia River. Since only two charter schools east of the river had more than 25 percent of their students cross the river to go to school last year, it seems likely that charters here attract non-at-risk students from neighborhood DCPS schools or keep non-at-risk students in the public school system who would have otherwise left for private schools or moved. 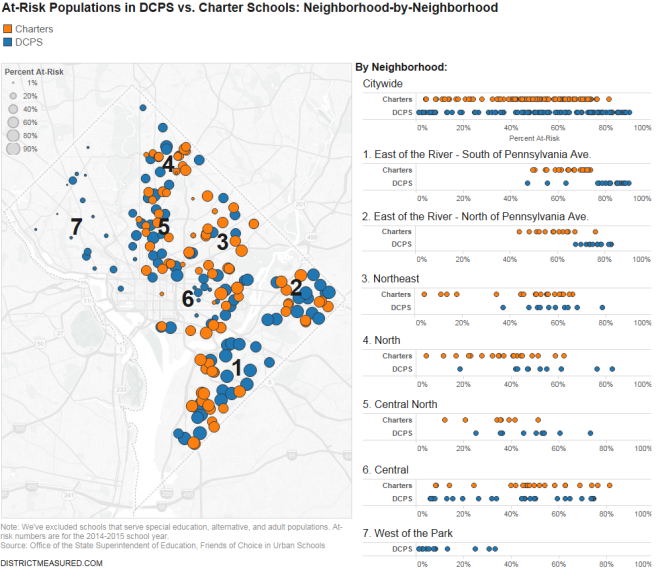 We’re curious to hear what you conclude from these graphics and what patterns you see that we may have missed.

Data on at-risk populations is from the Office of the State Superintendent of Education and is for the 2014-2015 school year. Readers should note that some types of students that might seem at-risk might not be counted as such, including:

We have excluded from our analysis schools that serve alternative, special education, and adult populations.

Three charter schools in the graphics above closed after the 2014-2015 school year: CAPCS, Tree of Life, and Options.

Thank you to Yesim Taylor for her comments on this post.