The U.S. Bureau of Labor Statistics counts both: in the 12-month period that ended June, 354,055 District residents held jobs (on average) and there were 759,667 jobs located in the District. It is not surprising that there are far fewer employed D.C. residents than jobs: as the central city of a large metropolitan area, the District holds almost a quarter of the region’s jobs but only about ten percent of its population. Indeed, there are more jobs located in D.C. than the city’s entire population. This makes it particularly noteworthy that over the past three and a half years, resident employment in D.C. has been increasing much more rapidly than the city’s job base. 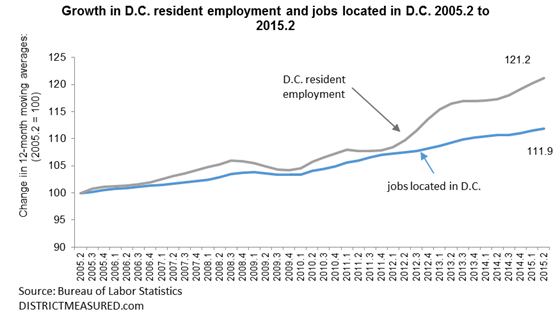 What accounts for this?

One factor that has allowed the District’s resident employment grow faster than the city’s job base over the past three and a half years is demographics. Not only did the population grow faster in the recent period (2.0 percent annual rate versus the earlier 1.4 percent), but also more of these newcomers are willing to work, and are able to find jobs .

But three other factors that could be at play. First, it could be that the newcomers to the city are taking jobs that are vacated by commuters who have moved or retired. We have showed earlier that the top reason why people move to the District is jobs. If these newcomers are taking jobs vacated by turnover (retirement or any other reason) they will increase resident employment but not the total number of jobs in the District.

Second, newcomers might choose to locate in the city even when they hold jobs in the suburbs. About 27 percent of D.C.’s employed residents were reverse commuters  at the time of the 2010 Census, and more of this may be occurring. Thus, the net increase in jobs located in DC need not define how much resident employment can grow.

There is a third, and rather underexplored, reason: self-employment. For example, a District resident who is working as an Uber driver would be reported as employed in a household survey. But the Bureau of Labor Statistics, which does not collect data from self-employed persons (they survey employers only), would miss this person in its counting of jobs located in the District.

Is there is a limit to how long resident employment can continue to grow so much faster than jobs located in the city? There is no clear answer. Over the past 30 years, however, the ratio of resident employment to wage and salary jobs located in the District has never been higher than 47.8 percent (in 1985, a time when DC had 17 percent of the region’s population, 33.6 percent of the region’s jobs, and had more people living in the city than working in it). At 46.5 percent we are not far away from this number, but suburbs were less important back then, both in how many workers they could send into the city, but also in terms of how many jobs they can give back to us. 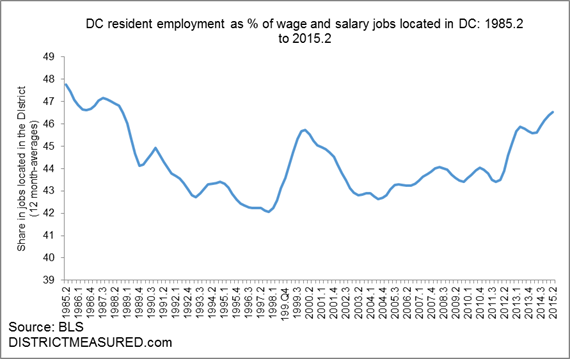 Each month the U.S. Bureau of Labor Statistics conducts two economic surveys that provide insight into the dynamics of D.C.’s economy. The first, a survey of employers of wage and salary jobs, measures the number of people working in DC regardless of where they live. The second, a household survey of residents, measures labor force characteristics including the number of DC residents who are employed regardless of the jurisdiction in which their job is located.

One thought on “For more than three years now, District’s resident employment has grown faster than the jobs in the city”