In this post we analyze how the two main components of housing costs-mortgage payments and property taxes vary in some of the nation’s most expensive housing markets. This approach has the advantage of capturing both the overall underlying costs of housing and the interaction between property taxes and home values.

By focusing on costs, rather than home prices, the data better reflects the fact that one of the main reasons for the sharp increase in home prices that has occurred over the past 20-30 years is the significant drop in interest rates that occurred over this time frame.  As a result of the drop in mortgage rates from almost 10 percent in 1990 to 4 percent in 2015, the payment on a home that cost $200,000 in 1990 is equivalent to a payment on a home valued at over $400,000 today. Here’s what the data looks like for all homeowners: 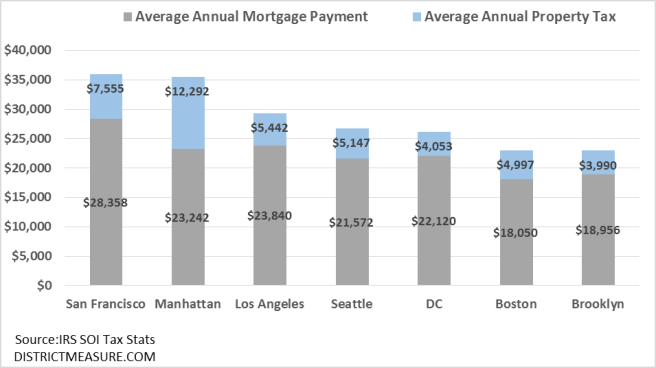 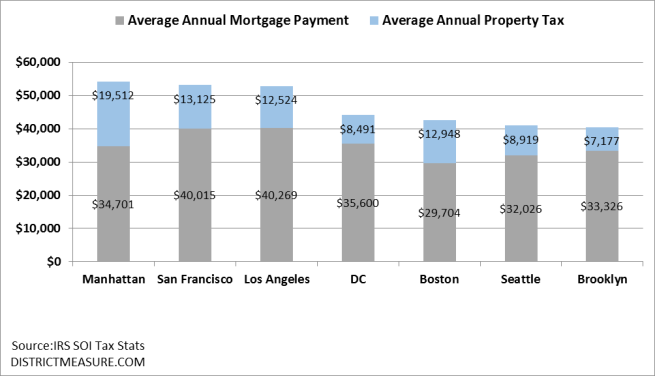 What can we conclude from the data:

What exactly is the data? Data in this report is from the 2012 IRS County Statistics of Income. Most homeowners in these expensive housing markets can itemize their mortgage payments and property taxes on their income taxes.  The IRS data has the advantage of capturing most homeowners in these markets rather than relying on sample data from the American Community Survey. The data also better reflects actual property taxes paid compared to published statutory rates.

Economic literature on this topic can be found in “The Effects of Property Taxes and Local Public Spending on Property Values: An Empirical Study of Tax Capitalization and the Tiebout Hypothesis” by Wallace E. Oates

One thought on “How Housing Costs Stack up in DC Compared to Other Expensive Housing Markets: Do Lower Property Taxes Lead to Higher Home Prices ?”