In March of 2015, for the first time since September 2011, the number of federal civilian employees working in the District showed an increase. If this is the end of a three year contraction in the federal employment, it is a modest one: the net increase was only 1,100 or 0.6 percent over the first quarter of 2014.

Looking back, fluctuations in federal jobs have been associated with major developments in the District’s economy. For example, federal cutbacks contributed to the conditions surrounding the establishment of the DC Control Board in 1995. More federal jobs helped the city cope with the aftermath of the 9/11 attacks and the Great Recession that began at the end of 2007. The recent loss of federal jobs appears, however, to have had only a moderate impact on the District’s economy, as total employment in DC rose by 33,634 over that period.

Looking back even further, to the period of federal cutbacks in the 1990s, we see an even more dramatic shift: From the second quarter of 1993 to the second quarter of 1999, DC lost 50,134 federal jobs, but the private sector gains during the same period offset only a third of this loss with a gain of 18,000 jobs. From 2011.3 to 2014.4, by contrast, the 49,200 gain in private sector jobs was about 3 times greater than the 16,166 federal jobs that were lost. About one-third of the new private sector jobs occurred in education, but increases occurred in a number of other sectors as well.

One thing to watch out is the difference in federal and private sector wages. Most private sector jobs that replace federal jobs pay much less, and if this trend continues, it will have implications on the type of workers and residents the District attracts.

Second, forces currently driving DC’s economy are less dependent on net growth of jobs located in DC. Starting in 2006, the year before the onset of the Great Recession, DC’s population started to increase, and from 2009 to 2014 it increased by 66,665 (11.3 percent). This increased attraction of the District of Columbia as a place to live has affected the economy in a number of ways, and the one most relevant here is that resident employment has been increasing more rapidly than the number of jobs located in DC. 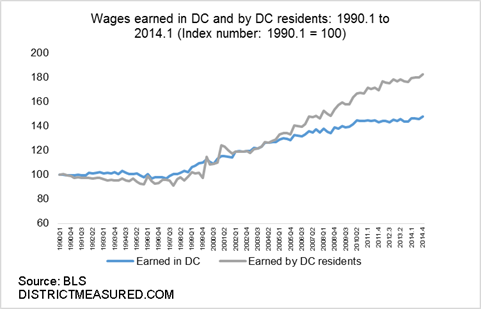 Third, federal contracting possibly fuels some of the strength in the District’s private sector. In recent years, federal government expenditures for non-defense programs have shifted toward greater reliance on purchases of goods and services rather than compensation of employees. The change was particularly great starting around 2000; from 2000 to 2014, federal purchases went up 153 percent, compensation by 91 percent. The increase in purchases of services was particularly strong, tripling between 2000 and 2010 before tailing off a bit. Data on such purchases from DC’s private sector are not available, but a pattern here similar to the national one would help to explain some of the rapid growth of professional and technical services in DC. Agencies are more likely to contract with businesses or professionals in close proximity. Indeed, employment in professional and technical services increased 54 from the first quarter of 2000 to the last quarter of 2014—this is almost double the 28.4 percent pace for employment growth in all of DC’s private sector.

The recent decline in federal employment may not have upended the District’s economy, but the federal sector remains a vital component of the District’s economy. Federal spending accounts for 26.1 percent of all jobs in DC, 31.1 percent of all wages, and is a source of contracts for DC’s private sector. What happens with federal spending will therefore have considerable influence on the future growth in DC’s economy. If federal spending remains flat or declines, the rate of growth in employment and earnings generated by the District’s economy will depend on how the private sector performs. DC growth rates then could approach or surpass the US only if DC’s private sector outperforms the nation as a whole. For most of the past 3 1/2 years, DC’s private sector employment actually grew faster than the US average, but it has been below it for the past three quarters. Wage and salary growth in DC has been about the same as the US average.

Increases in federal employment and earnings were important for DC’s economy in recovering from the recession in 1990, the 9/11 attacks and recession in 2001, and, of course, the Great Recession from 2007 to 2011.3. Thus, the federal government’s stabilizing role will likely remain important for the District’s economy in the coming years.

You can find more on this topic in our most recent Monthly Economic and Revenue trends report.

What exactly is this data? Employment data is from Bureau of Labor Statistics, and wage data is from the Bureau of Economic Analysis. Totals for jobs and wages include state and local government. DC resident wages and salaries estimated by the Office of Revenue Analysis, assuming wage and salary supplements are the same % for DC resident wages as for wages earned in DC. Detail may not add due to rounding. Government consumption data is from NIPA Table 3.10.5. Government Consumption Expenditures and General Government Gross, also from the Bureau of Economic Analysis, last revised on April 29, 2015.

2 thoughts on “The federal government is a stabilizing factor in the District’s economy, but its role is getting smaller”