In a previous post we examined patent data as a measure of innovation that occurs in the District and in other major cities. Using this measure, we observed that while the District was among the leading tech centers in the nation, it still lagged behind some of the top tier cities, particularly those on the West Coast.  The data also suggests that a strong eco-system supporting innovation was likely to be an important factor in explaining where innovation occurs.

Following up on this research, we look at another aspect of the technology eco system– internet access among households.  It’s difficult to imagine how individuals can be competitive in today’s tech world without access to internet in their homes. This is particularly true given the very young age of tech entrepreneurs and the fact that they are  likely to develop crucial  internet and computer skills early on in their lives, at home and in school, rather than in the workplace.   A study by Hans Kuhlemeier  and Bas Hemker, The impact of computer use at home on students’ Internet skills, found that “home access to e-mail and the extent to which students use the home computer for surfing, e-mailing, chatting and text processing were found to be substantially related to Internet and computer skills (taking into account the effect of several background characteristics of the students).”

Using  U.S. Census data we examine the digital divide that exists among households of different income levels and whether income and other demographics factors such as age and race explain differences in internet availability across major cities.

Here’s what the data shows: 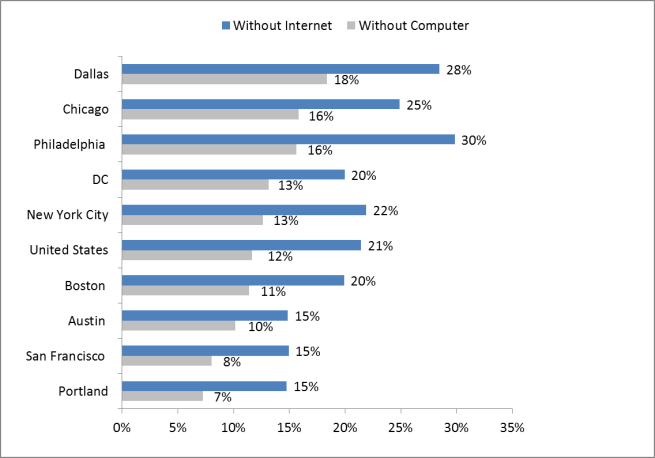 Overall computer and internet availability for District households was comparable to the national average, although DC lagged behind several competitor cities such as San Francisco, Austin and Portland.

The data shown above does not reflect the large differences in internet availability among households at different income levels. Other research has highlighted the digital divide that exists between low income households and high income households.   Here we compare DC households to households in other competitive tech cities with the same income.

Percent of Households Without Internet Access: Incomes Less than $35,000 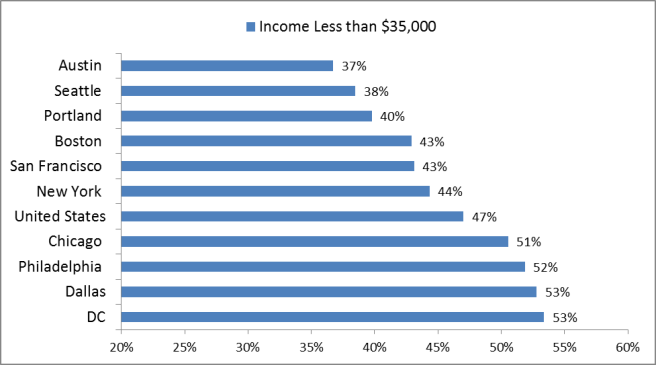 For households with incomes greater than $75,000 (shown below) the situation is very different.

Percent of Households Without Internet Access: Incomes  Greater than $75,000

While internet access and income are strongly correlated, research also suggests that other demographic factors such as age and race also account for differences in internet use.  A Pew Study  found that seniors and minorities were less likely to use the internet.  We looked to see whether age and race could account for the large difference in internet access between DC and San Francisco.   We found that San Francisco had a much higher concentration of low income households among seniors compared to DC and that age or income alone did not account for the lower internet availability in DC.  A larger presence of minorities explained some, but not all, of the gap between DC and San Francisco, after controlling for income and age. Other non-demographic factors, including innovative private and not for profit outreach efforts targeted at low income households, cultural factors and other social factors are also likely to help explain the digital divide.

What exactly is the data?

Data are from the U.S. Census Bureau:  2013 American Community Survey. Data are based on a sample and are subject to sampling variability.

An abstract of the study “The impact of computer use at home on students’ Internet skills” by Hans Kuhlemeier  and Bas Hemker can be found by clicking here.

One thought on “Innovation in the District: Why is DC’s digital divide larger compared to other cities? What factors account for the divide?”