Some D.C. parents say weak middle schools cause students to leave DCPS for charters, or leave the school system altogether. The Washington Post has called this “sixth-grade brain drain.” So just how bad is the loss of students as they approach their middle school years? 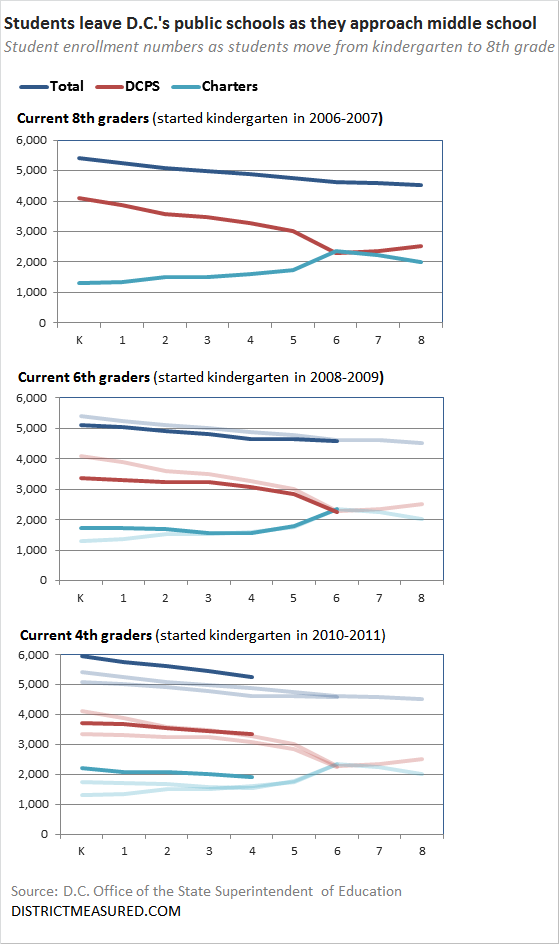 This school year there were 4,515 eighth-graders in public schools across the city (in both charters and DCPS). This group started out with 5,404 students in kindergarten in the 2006-2007 school year. That means the school system lost 889 students, or more than 16% of those who started kindergarten in 2006-2007. This is the net loss of students, meaning 889 more students left the system than entered it after their kindergarten year. Some of these students left the city and others switched to private schools.

Enrollment data show this loss of students is driven by children leaving DCPS, especially between grades 5 and 6. The graphs above show that DCPS students are both switching to charters and leaving the system.

Let’s look forward two more years to students who entered kindergarten in 2010-2011. These students are currently fourth-graders. The first thing we notice is this group of kindergarteners is bigger than the other two cohorts we looked at – it had over 5,900 students, hundreds more than the other two years. This is probably due to a surge in enrollment in the pre-K grades starting in 2008. Even though this cohort started off with strong numbers, the drop in enrollment between K and 4 for this group was slightly higher than that of the earlier cohorts. Still, it’s on track to have a higher middle school enrollment since it started with a larger kindergarten class. 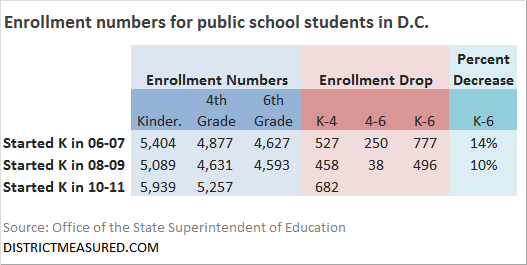 One last note: we know that enrollment in D.C.’s public schools spikes in ninth grade. We believe this is mostly due to the large number of students who repeat ninth grade. The Washington Post reported that 40 percent of first-time ninth-graders in DCPS are held back.

What exactly is this data? These are the audited enrollment numbers from the Office of the State Superintendent of Education for school years 2006-2007 through 2014-2015. You can find the numbers here.

5 thoughts on “The Middle School Effect”