We took a look at the waitlist numbers to see what they say about demand for public schools throughout the city. The waitlists aren’t perfect measures of demand – the biggest complicating factor is that all open charter seats are filled through the lottery, whereas open seats in traditional schools are offered first to students who live in the attendance zone, then to out-of-boundary students through the lottery. Still, we think the numbers paint an interesting story.

Here are our findings, along with some interactive graphs and maps so you can make your own comparisons and conclusions:

Demand for DCPS schools is strong west of Rock Creek Park and in Capitol Hill. Charters are popular east of the Anacostia River and in the north-central part of the city.

The interactive graph below shows waitlist numbers by grade. By looking at entry grades (like PK3, K, 6, and 9) you can see which early childhood, elementary, middle, and high schools are in demand. (Click here to interact.) 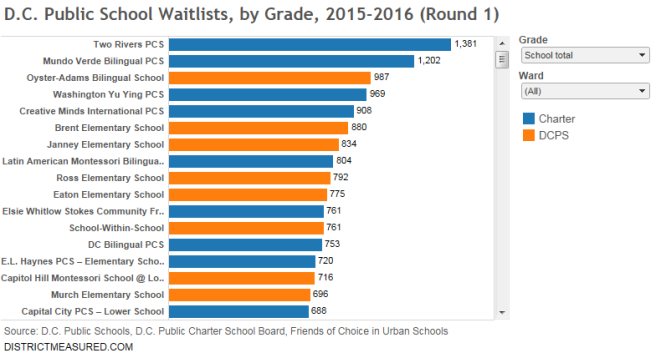 The graph below shows that a lot of schools with higher test scores also have high wait list numbers, but there are plenty of exceptions. Some of the waitlist differences are due to some apples-to-oranges comparisons we’re making, since we’re looking at both charters and DCPS schools; mixing early childhood, elementary, middle, and high; and have even thrown in application high schools.

Despite these differences, you can use the graph to find relatively similar schools with similar test scores that have widely different waitlist numbers. Ludlow-Taylor Elementary and Brent Elementary, for instance, are both DCPS schools where 77 percent of students are proficient or advanced in reading. Ludlow-Taylor has a waitlist of 413, while Brent’s is 880. This is consistent with other research that shows parents consider more than just test scores when choosing schools. (Click here to interact.)

What exactly is this data? The waitlist numbers are from D.C. Public Schools (available here) and the D.C. Public Charter School Board (available here). Test score data and geographic data for schools (ward, latitude, and longitude) are from the Friends of Choice in Urban Schools (available here). The reading scores used in the last graph are the scores from the 2014 DC CAS. Note that the number of applications schools received are even larger than the waitlist numbers since students matched with one of their higher-ranked schools are removed from the waitlists of schools they ranked lower.

Correction: In the original version of this post we were missing the waitlist numbers for the Spanish immersion program at Tyler, grades 2-5, and for the dual language programs, grades PK3-1, at the following schools: Cleveland ES, Marie Reed ES, Oyster-Adams, and Powell. This led us to undercount the waitlists at these schools in our original post. We’ve updated the post, map, and graphs to correct for this.