The composition of income for DC taxpayers changes significantly as income, filing status, age and ward of residence changes.

Wages and salaries become a smaller part of total income as income increases.  In tax year 2011, salaries and wages made up about 80 percent of adjusted gross income (AGI) for DC taxpayers with annual reported income below $250,000. For those with AGI exceeding $500,000, wages and salaries made up less than 50 percent of their total income. Rental income averaged about 30 percent of total income for taxpayers making between $0.5 million – $5 million.  For taxpayers with AGI over $5 million, capital gains made up more than half of their total AGI, and non-wage and non-retirement income, including business income, rental income, capital gains, interest, and dividends — accounted for almost three quarters of AGI. 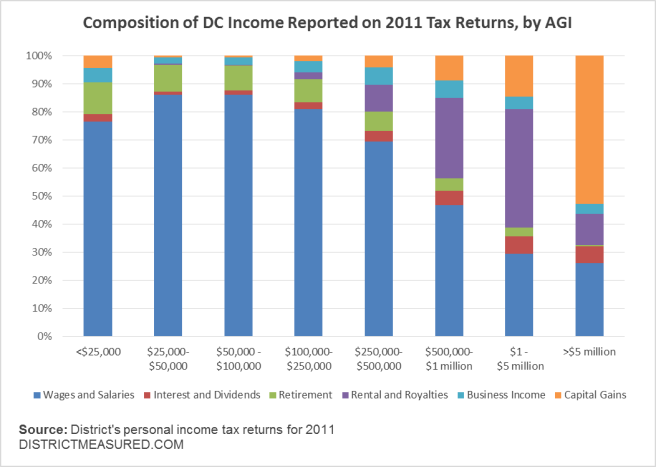 Married couples and domestic partners are more likely to collect income from capital gains, business income and rents and royalties.  Wages and Salaries made more than 80 percent of AGI for single filers and 85 percent for tax filers who claimed head of household filing status.  As for married couples or domestic partners, wages and salaries accounted for only about 60 percent of reported income. 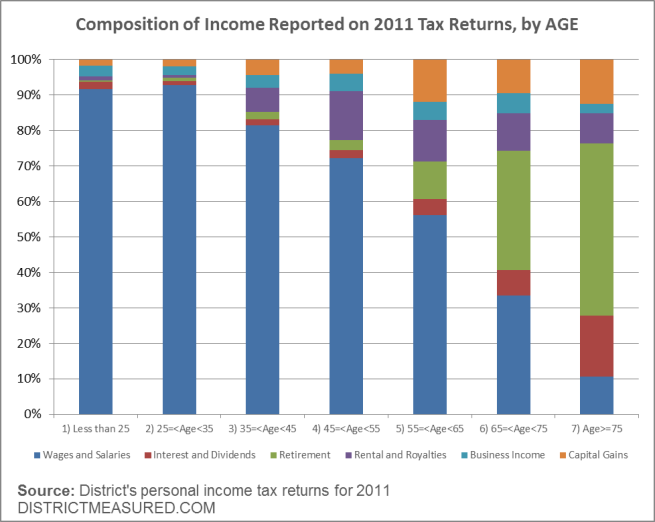 Taxpayers in Wards 2 and 3, who are generally higher income earners, receive a significant amount of non-wage and non-retirement income. Taxpayers in Ward 3, for example, received 52 percent of their income from wages and salaries, while wages and salaries contributed more than 80 percent of total income for taxpayers living in Ward 1 and Wards 5 through 8. Taxpayers living east of Anacostia River, in Wards 7 and 8 had virtually no business, capital gains, interest and dividends or rental income, according to the 2011 tax returns.

One thought on “Sources of income change by income levels, tax filing status, age and ward”