Housing in the District of Columbia is expensive.  The U.S. Census tells us that the District had the second highest median housing prices in 2013, after Hawaii.  Listing price data from the online real estate company Trulia for February 2015 also ranks District second highest among states.

Last week, the District’s tax office put in mail the residential property assessments for Tax Year 2016. The aggregated data at the city and neighborhood levels tell us the following: 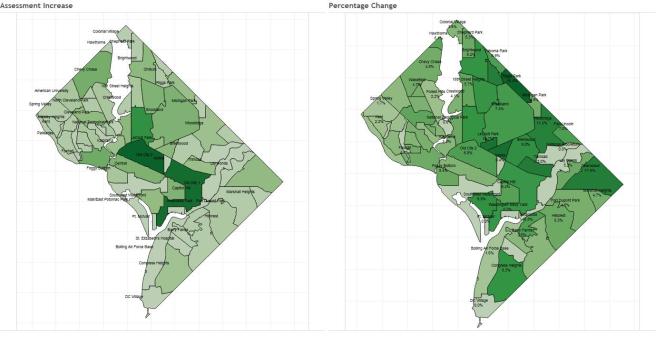 Comparing the residential market value assessments today to those of 2000 show that housing assets are more equally distributed across the city.  In 2000, Georgetown and Chevy Chase–just two neighborhoods–accounted for 15 percent of the assessed market value in the city.  Today, they account for less than 10 percent.  Seven neighborhoods in the west of Rock Creek park, plus Old City and Capitol Hill collectively accounted for half the housing value in 2000. Today, growth in the Old City neighborhoods have balanced out the values in west of the Rock Creek Park.  Southwest Waterfront, Brookland, and Petworth also hold significant value. 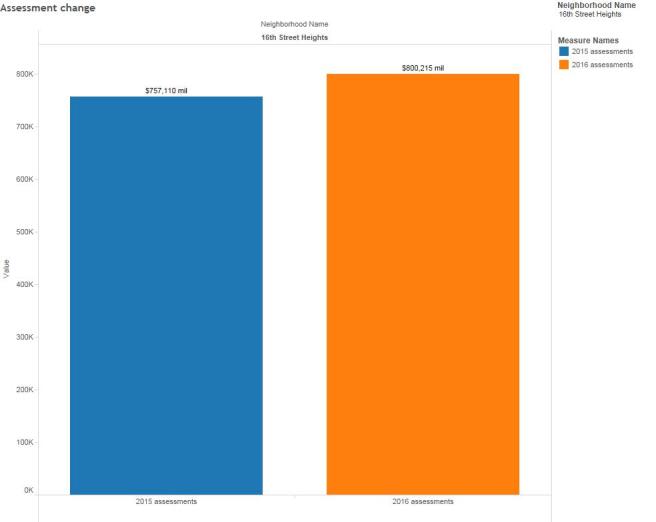 What exactly is this data? Tax years 2015 and 2016 data are from District’s Computer-assisted mass appraisal (CAMA) database, aggregated for assessment neighborhoods.  The 2010 assessment data is from the real property tax database for 2001, as it was extracted in March 2001.  2001 and 2016 data are not perfectly comparable since assessment methodology was different, and neighborhood definitions in 2000 were slightly different from the definitions today, but one can draw broad conclusions.  The data presented here are assessed market values. The tax base for the District is related, but different:  the difference between market assessment and taxable assessment is the homestead deduction, but taxable assessments can also be constrained by the 10 percent cap on the annual growth in each property’s taxable assessment.

John Codd at the Office of Tax and Revenue helped with this post. (All errors belong to the author)